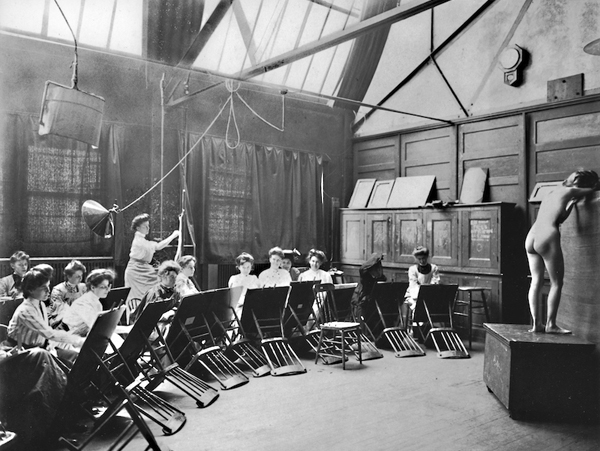 In August of 1906, Comstock raided the rooms of New York’s Art Students League, seizing hundreds of copies of the school’s June magazine, “The American Student of Art,” which included two pages showing art studies of nude models. The only person present in the student offices was the League’s 19-year-old bookkeeper, Anna Riebley, so he arrested her and carried her off with 3,650 copies of the magazine. Comstock said by the indiscriminate circulation of the brochure it might fall into the hands of children; this constituted a menace to the public morals and he had seen several envelopes addressed to “Miss.”

At the first Police Court hearing, a reporter glanced at a copy of the magazine and Comstock snatched it from his hand, saying, “Don’t look at it. I’ll let no one see it.”

In denying another reporter’s request, he said, “If I offered those pictures for your inspection I should be laying myself open to arrest, and it would be no excuse even should I do so with a pure motive.”

“As to our right to stop publication of the magazine,” he continued, “we are justified by a dozen court decisions. Wild animals are all right in the zoo, but when they break out they must be suppressed. Well, the animals have broken out in the league. So long as they keep their nude pictures in their cages and nude models in the studio we will not molest them, but when they attempt to circulate obscene pictures in the homes of innocent boys and girls they are breaking the law.”

At the trial that followed, Comstock told a reporter, “When I went into the studio there first, I saw two pictures of unclothed beings on the wall. There were a number of young people looking at those pictures. Were they studying those pictures from motives of art? No, Sir; they were not. They were actually enjoying them; young people enjoying the pictures of two unclothed human beings!”

In January of 1907, after all copies of “The American Student of Art” had been destroyed, Comstock withdrew the charges against Anna Riebley.